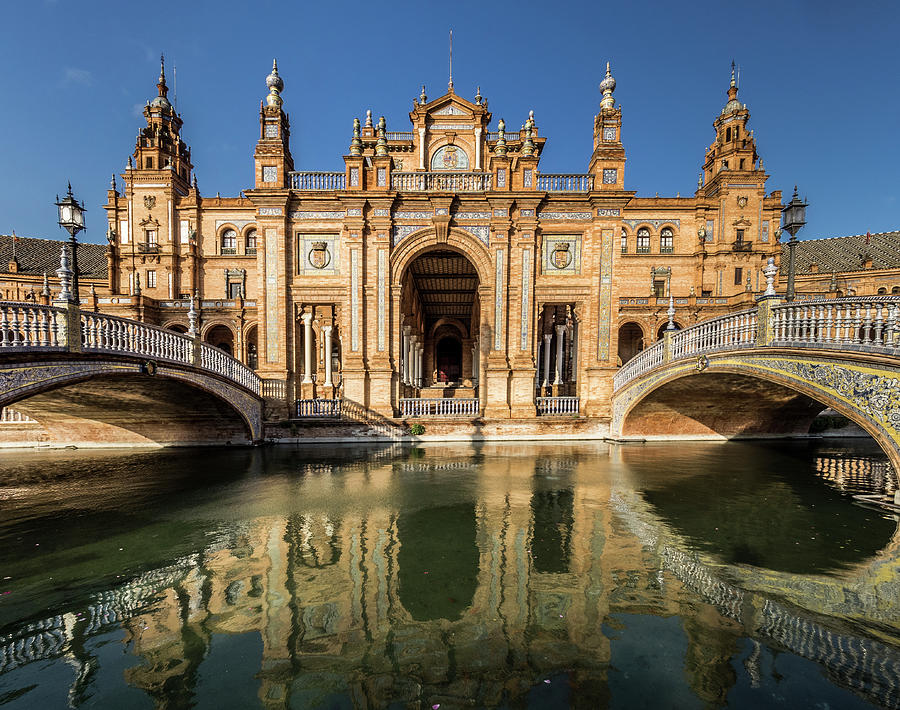 This massive building is Seville's most impressive after the cathedral, for its sheer scale and grandeur. Love it or hate it - fabulous or fussy, magnificent or overblown, depending on your point of view - you shouldn't miss it when visiting the city. Plaza de España was built for the Ibero-American Exhibition of 1929 (Expo 29), along with many of the pavilions you can see in and around the Parque Maria Luisa
Plaza de España is a semi-circular brick building, Renaissance/neo-Moorish in style, with a tower at either end (tall enough to be visible around the city, these towers - north and south - are major landmarks). In front of the building, following the curve of its façade, is a 500-metre canal crossed by four bridges, and in the centre of it all is the Plaza itself. You can rent small boats to row in the canal - the Plaza is known as "the Venice of Seville". A major tourist attraction, it is the finishing point of horse-and-carriage rides.

The Plaza is situated inside Maria Luisa Park, next to Avenida Isabella La Catolica.
The Plaza was built as the centrepiece of the Expo 29, which took place in Maria Luisa park, as the Pabellon de Andalucia. The architect Anibal Gonzalez designed the Plaza to wow the Expo's other exhibitors, and visitors, from around Spain and Latin America, and to show Seville's talents in industry and crafts

Congratulations! Your wonderful image has been featured in the Arches for Artists and Buyers group. Please archive your image in our Image Archive in discussions!